The 5-Steps To Increase Your Son/ Daughters Independence

Learn the key principles that have helped many people with disabilities grow into their potential!

The Magic of Connecting Families Together

The #1 Thing Learned Supporting Sarah To Create Her Own Home

We Need To Talk About Anti-Racism and Disability

Would you like to receive a short weekly video from me to help you plan the future with your loved one that has a developmental disability? 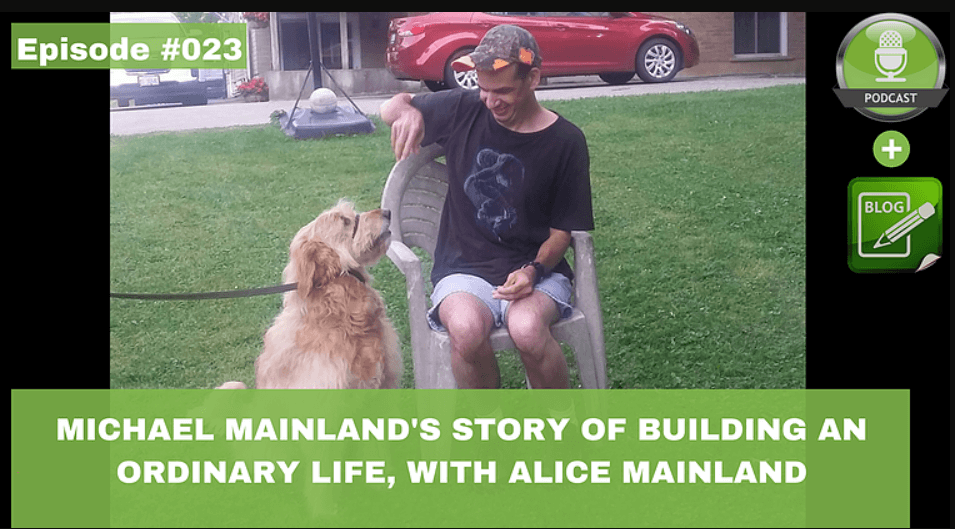 This is the story of Michael Mainland’s incredible ordinary life. Michael is 38 years old, works at Boston Pizza, lives in his own house, has a roommate, and volunteers regularly. What may come as a surprise to some is that Michael has a developmental disability that over time resulted in Michael becoming non-verbal, and has reduced his fine motor skills. I had the opportunity to interview Michael’s mother, Alice Mainland, to learn Michael’s story and to learn how Michael has created his ordinary life.

In the 2 months before Michael graduated from high school, Michael and his family realized they had a problem; there would be nothing for Michael once school ended, and one of his parents would have to stay home to support Michael. As a result, the family would drop down to a single income. Alice started making phone calls to various support agencies, local government, and basically anyone with a phone number that might be able to help. The people she called were willing to help! With the support of a few agencies the family was able to piece together support for Michael, which allowed the family to stay a two-income family.

Alice shares, “You don’t know what resources are available to you until you ask. “

At 29, Michael had the opportunity to move out of home because of a conversation 4 -5 years earlier when Alice was searching for support for Michael.

Michael’s family purchased a duplex where Michael lives with a roommate in one unit, and a supportive neighbor lives in the second unit who is available for overnight support. The family focused on creating a great home for the supportive neighbor, and this strategy has been effective at attracting and retaining long-term tenants.

The first few weeks Michael lived on his own was a worrisome time for Alice and her husband, however their worries didn’t become a reality.

During the week Michael lives at his own house, works at Boston Pizza, and volunteers at the local foodbank. On weekends, Michael gets to spend quality time with his parents on their rural property. Alice and Michael often run errands in town on the weekend and Michael has 2-3 times the number of people saying hello to him compared to his mother. This is a great sign that Michael is building relationships in his community.

What’s next for the family?

Who is going to take care of the house when Alice and her husband aren’t there?

Who will help Michael make decisions?

To ensure continuity in Michael’s future his family is looking at forming a micro-board. The purpose of the micro-board will be to help manage the home, and to help Michael make future decisions.

Lessons we can learn from Michael and his Family on living an ordinary life:

1. Ask for help. Michael’s family reached out to anyone with a phone that might be able to help them. The people on the other end of the phone had good intentions and wanted to help.

2. Environments where he can learn from his peers. Regular school classrooms (Shop and Gym for Michael), working at Boston Pizza, volunteering, the Special Olympics.

3. Opportunities to show off his skills. Michael loves to show off what he is good at from work to his recreation of horseback riding.

4. Proloquo2Go.  Michael is non-verbal the Pro lo to go app on his iPod empowers Michael to express himself more fully with others.

5. Let go, and let in. Over time Michael’s parents have had to let go, which has allowed Michael to become his own person. The family has also had to allow other people to enter and be a part of Michael’s life. (Without interviewing them first!). At some point, someone else is going to have to be there for Michael other than his parents.

*You can listen to the podcast to hear the full story and gain all of the lesson’s learned by Michael and his family.*

I thank Alice for sharing her family’s story. There are great insights and lessons that we can apply to our own situations.

Our mini-series on housing for people with disabilities is continuing so go ahead and Subscribeto the mailing list to get all 6 episodes sent directly to your inbox!