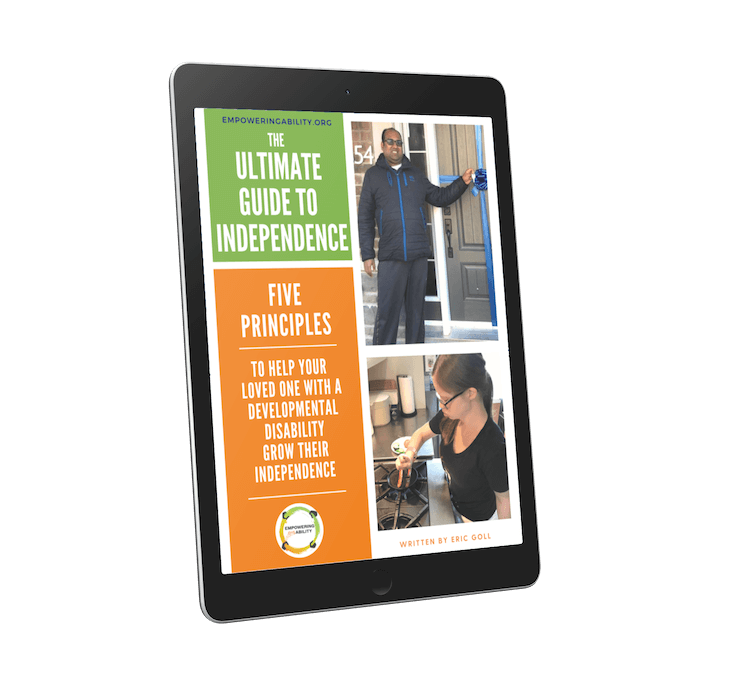 Achieving Your Goals in 2022

Sign up to get your weekly 5-minute video tip!

Would you like to receive a short weekly video from me to help your loved one that has a developmental disability live into their Awesome 'Ordinary' Life?

#029: Bill Hiltz Story: Freed From the Cage of Incapability 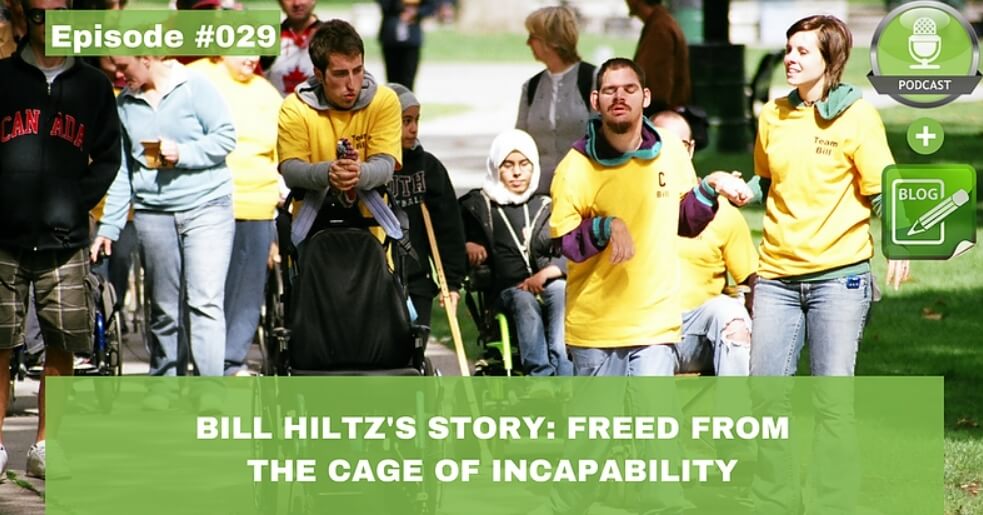 In this podcast episode, I had the pleasure of interviewing ‘Team Bill’, including; Bill Hiltz, and his supporters Joyce Balaz and Arn Row. Bill is a disability advocate that is promoting positive change in the Ontario political arena by sharing what it is like to live in his shoes. Bill is non-verbal, and he is impacted by an uncontrolled seizure disorder that can rule his life. In this episode, Bill shares his story including how he was mistreated and caged in an institution as a toddler, freed by loving people, and how he has grown into a leader advocating for positive change for people with disabilities.

Joyce: “When Bill was born there were complications with the birth that led to Bill’s seizures. At the time, his family didn’t have the resources and supports to provide for Bill, and Bill went into foster care system at 1.5 years old. Bill went into a number of foster families, in and out of the hospital, and then ended up at Christopher Robin, which was an institution in Ajax, Ontario. At the age of 8, Bill was ‘rescued’ by a family who had already adopted another child from the same institution. The institution closed a few years later.”

Arn: “It is important to share Bills experience in that institution. Bill’s time was mostly spent in a crib cage, which had 4 sides and a top on it. Bill wore a helmet because he was banging his head on the bars, which was Bill’s way of trying to tell whoever would listen that he didn’t want to be in there.”

Joyce: “When he was taken in by the family after the institution they just loved him to death, and he lived with them for 12 years (until he was 19). There were 3 other boys in the household that were involved in many things and it became difficult to manage once Bill turned 19. It was time for Bill to transition to another living arrangement.”

Joyce, who was Bills educational assistant (EA) at school since the age of 13, heard that Bill was looking for a new home. Bill and Joyce gave living together a couple of trial runs and it went well. Bill then moved in with Joyce. Since then they have blazed a trail with their advocacy work, and growing and learning together.

Start with the Assumption of Capability

When you see Bill you wouldn’t expect him to have done the things that he has done in his life. When Bill was in the institution as a toddler he was caged because he was misunderstood. Assumptions where made about his capability, or should I say incapability. Bill was shown love and respect by the family that adopted him, and since by Joyce, Arn, and many others. Bill’s story highlights the dangers of starting with the assumption that a person isn’t capable.

What is the worst thing that can happen if we start with the assumption that someone is capable? They fail, and hopefully learn so they can be more successful in their next attempt. (Yes, it is important that we consider holding people capable in an environment that is safe for them so that if they do fail they have the opportunity to get back up and try again.)

Always start by holding people capable, disability or not!

Bill taught me this invaluable lesson. When I first met Bill I assumed that Bill wasn’t capable of having a conversation with me – and boy did he prove me wrong! Thank you, Bill.

We discuss holding people capable in more depth on the podcast.

Our Fear of ‘Different’

It took me well over 5 days of being around Bill before I actually engaged in a conversation with him. What took me so long to talk with Bill?

It was my own fear.

I judged Bill because I had perceived Bill as being different than me. This self-acknowledgement hit me square between the eyes. My sister has a disability, and I have several friends that have disabilities, and this fear was still present inside of me. What does this fear look like for others that have not had contact with people with visible disabilities like I have?

Joyce had a similar experience when first meeting Bill as an educational assistant (EA). Joyce shares, “…. I told the teacher that I didn’t want to work with Bill because I didn’t know how to work with him. The first time that I told Bill this he was mad, and didn’t talk to me for two weeks. Now that he has heard this story a number of times it has given him an opportunity to think about how other people view him.”

How is your fear holding you back from interacting with a person that you perceive as different? It could be a person with a disability, a person from a different ethnic background, or a different religion.

How Do We Best Communicate with Bill (and others that have a developmental disability):

In this episode, we discuss how it can be difficult to enter into a conversation with a person when there isn’t a response or acknowledgement back from the other person.  This doesn’t mean that that person isn’t interested in engaging with you. Here are 3 tips we provide on the podcast to communicate with people that have a developmental disability:

3) Ask how to best communicate with the person

Bill has shared, we need to learn how to slow down. A fast pace verbal world isn’t the world that Bill lives in. Bill gives others the gift by providing them to slow down and operate at his frequency.

Bill’s seizures have such a severe impact on his energy that he has forgone his recreational activities, such as horseback riding, and uses his energy to solely focus on his advocacy work.

Bill envisions a world where we are seen as we who we are, not for what is different. Bill shares, “People have been excluded for so long, which means people see the difference first. When people we are truly included others get to experience who we really are.”

Bill has started the “Walk a Mile in My Shoe” project (seen in the blog cover photo) where he invites people to acquire a disability, (for example loss of sight, hearing, or physical ability), and walk beside him to experience what it is like to live with a disability for a short amount of time. Bill’s theory is that the experience will lead to understanding, which will lead to change.

You can support Bill by visiting his website, or participating in/ sponsoring one of his events. The proceeds go to the organization Reach for the Rainbow, which provided Bill with camp experiences as he grew up.

*Listen to the podcast for more stories from Team Bill and to learn more about how you can support Bill’s vision.*

Bill shares his wisdom with us in his powerful poem, titled ‘Understanding People’

A SET OF STANDARDS BY WHICH TO JUDGE
TO THEIR FRIENDS, THEY GIVE A NUDGE
WHEN THEY SEE ME COME THEIR WAY,
THEY STOP AND WALK THE OTHER WAY
OR EVEN WORSE, THEY STOP AND STARE
AS IF I’M STUPID AND UNAWARE.
IF ONLY THEY COULD KNOW, THAT I CARE;
HOW PEOPLE VIEW ME–IT’S JUST NOT FAIR!
I FEEL THE VERY SAME AS OTHERS DO,
THEY SHOULD TRY AND WALK IN MY SHOE.
LIFE’S NOT EASY, WHEN THE BODY THAT YOU OWN
WAS GIVEN TO YOU BROKEN-DOWN.
THEY MAY BE MEAN; THEY MAY BE CRUEL; THEY MAY BE BAD;
BUT MOST OF ALL…THEY JUST DON’T UNDERSTAND.
WITH SOME TIME AND SPECIAL GUIDANCE;
WE CAN HAVE A GREAT ALLIANCE.
FOR AN HOUR, OR FOR A DAY;
WE ALL NEED FRIENDS ALONG THE WAY.
SO WHEN YOU SEE ME COME ALONG
TRY NOT TO FOCUS ON WHAT IS WRONG;
I AM A PERSON JUST LIKE YOU,
WHO NEEDS AND DESERVES A GOOD FRIEND TOO.
JUST WALK BESIDE ME STRAIGHT AND TALL
AND BE THE FRIEND THAT I CAN CALL
WHEN I AM LONELY AND AFRAID.
JUST REMEMBER WHAT I’VE SAID:
ALL YOU NEED IS TO UNDERSTAND;
DO NOT JUDGE JUST TAKE MY HAND.

I thank Bill, Joyce, and Arn for coming on the podcast to share their story and insights!

Walk a Mile in my Shoe: Video: Click Here